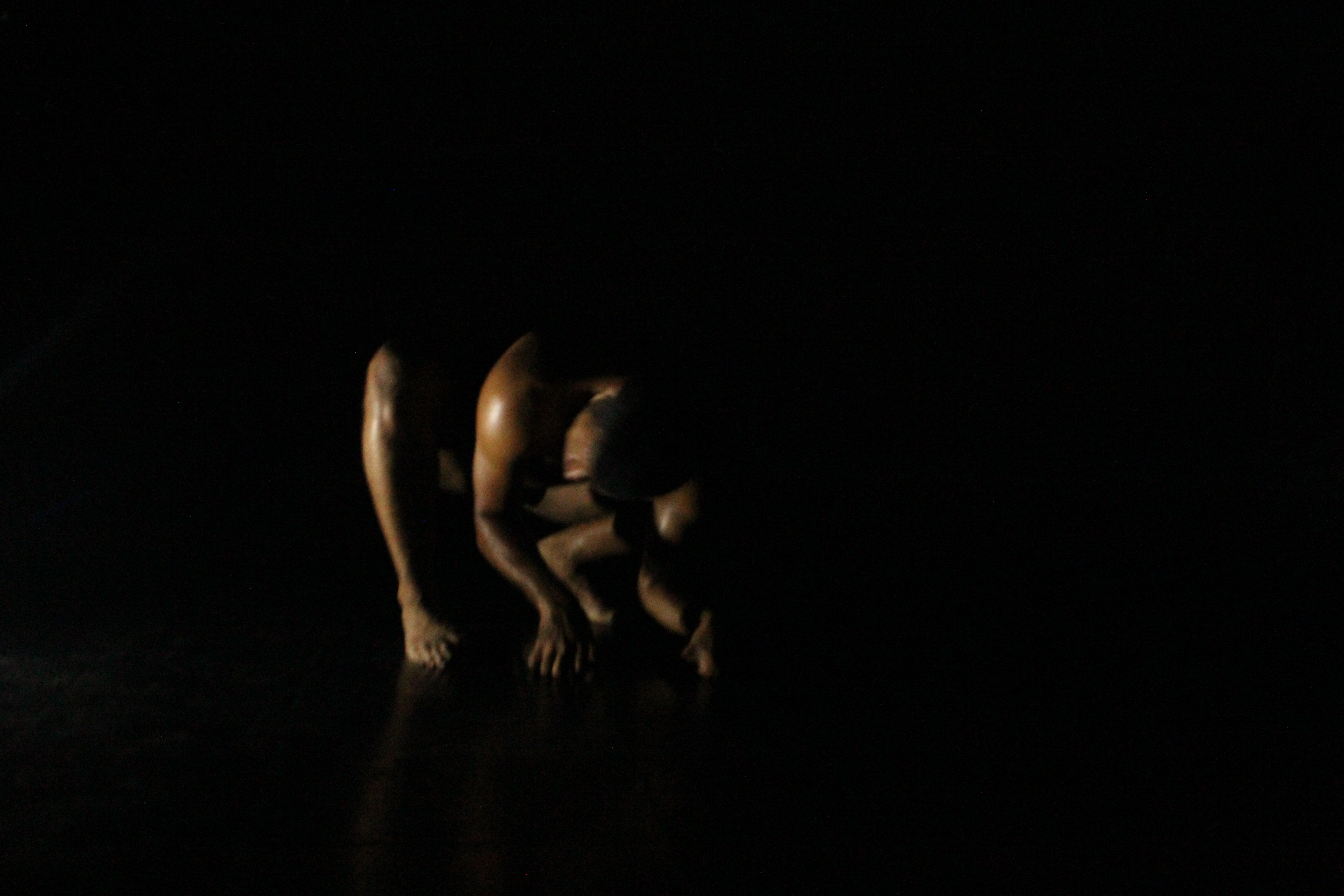 ƎSPÉCIE does not refer to the identifiable, but to what belongs to us and we do not know about. At the unlikely instant when the visible touches, crosses and is confused with the invisible. Its dramaturgy is structured by subtractions, the aesthetic experience is installed as a challenge. Its first movement is that of the darkness that invades the spaces of the gaze of the observer. An invitation to diving and immersing in a territory of the possible. In search of other ways of seeing, of experiencing absences as fields of knowledge that are yet to be recognized, and through them try to practice some silence as collective speech. In an unlikely way, light the flash that pops from this intimate and face-to-face encounter with a body in a continuous state of transformation and metamorphosis, in successive acts of abandonment, of construction and collapse, of appearance and disappearance. Encounter with an open body that escapes identity accommodation and meanings, but creates a universe where images are embodied and presented. Like the animal, the woman and the elder, who among others shuffle like a carousel, in a diffuse trajectory, in a flow that transposes the looks in the precise duration of the act of investigation of the performer’s body, by the performer’s own body. That when transiting through sensory-perceptual states makes explicit the unique and singular ability to transubstantiate their materiality, to externalize in actions the liquids inside - the saliva, sweat, tears, the emptiness of the room makes the noise of swallowing saliva seem like a frog. A moment of astonishment: who watches who? The work proposes to refrain from any artifice, including usual technical resources of the theatre, so that each movement, or scenic act, focuses attention on the dynamics and particularities of the body and its relations with space. ƎSPÉCIE is an adventure of life stuck on its surface, of the forces of existence in its multiple, mysterious, strange condition of being in front, intimate and open to what is alive and instinctual.

Artist, researcher and gardener, with experience in management and production. Student of the PhD program in Performing Arts at UNB. Professor at Escola de Música e Artes Cénicas da UFG, where he coordinates the transesthetic residency programme - Conexão Samambaia, which results of his commitment to the promotion of the dissemination circuits of the expanded field of the arts.

Actor, dancer, teacher, director and screenwriter. Graduated in Performing Arts from UFG. When talking about his career, he often stresses that he does not remember precisely the beginning of his passion for theatre, but reiterates the certainty that he will never stop dedicating himself to the art of acting. A frequent partner of research and creation of Valéria Braga since the founding of Casa 107 Vivace. He has collaborated with Grupo Cabeça de Vaca, in the plays Bodas, Azul Esgotado, Dúplice and Hábitos Noturnos. Among the many artists with whom he has collaborated and co-starred are Érica Bearlz, Rodrigo Cruz, Fernanda Pimenta and Elena Diego, the filmmakers Daniel Calill, Fabrício Cordeiro and Isaac Brum, and the directors Júlio Van, Samuel Baldani and Hugo Rodas.

Artist and multidisciplinary researcher. Theatre director and actress with experience in cinema and the performing arts. She has dedicated, for more than fifteen years, to the maintenance of autonomous spaces for creation and artistic production. She has a Maste’sr Degree in Cultural Performance and a specialization in Cultural History.