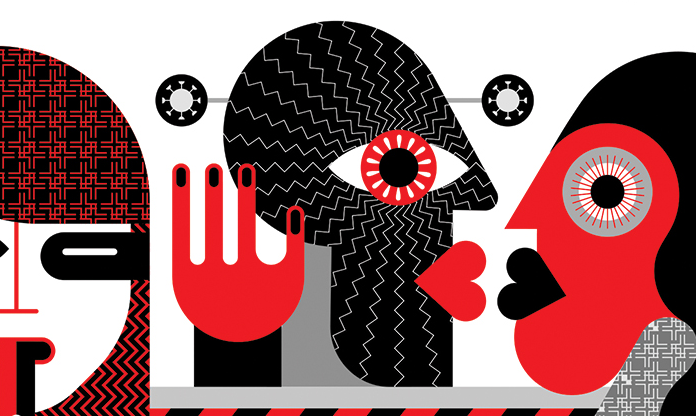 The Covid 19 pandemic caused an emotional shock around the world, convulsing life as we knew it and contaminating our intimate experiences. Although we all want to forget and overcome what we went through, we haven’t talked enough about the marks that it left on us. We have not yet garnered a wider collective awareness of how our private lives are determined by the political, mediatic, social or cultural constraints we are exposed to. The book Quem tem medo das emoções (Who is afraid of emotions?) brings together incidents that substantiate the evidence of such conditioning, showing the decisive relationship between our individual emotions and the affective bonds in which we are immersed on a daily basis. The book’s purpose is to convey a series of contemporary concepts and authors who think critically about affections, helping us to understand the complex meshes that entangle us. On the pretext of the recent release of Quem tem medo das emoções? and the inauguration of the installation/performance by Eunice Gonçalves, the researchers Jorge Martins Rosa and Graça P. Corrêa join her to exchange ideas about collective emotions and their dissemination in the public space, the emotional impact of images of catastrophes on our bodies and minds — a contagion to which no one is immune —, and also on how art can trigger emotions and contribute to a collective awareness of these invisible threads. One single thought is sufficient to poison the blood. It’s like a tea bag dipped in boiling water. Inert and seemingly harmless, its contents contaminate the water where it submerges. The aroma of the plants is diluted, gently winding in small waves until all the water has the colour of tea. In just a few minutes the whole teapot has the same colour. The same happens with thoughts, which transform the emotional tone of our bodies. Let us imagine that a negative thought pops up in our mind, dissolves silently, and seeps into our bloodstream, without us being aware of it. Suddenly, the whole organism is tinged by the emotional charge that this thought carries and, like a filter, permeates all our behaviours and actions from then on. We acquire the emotional tone of this thought, even if we are not aware of it. What is the colour of our blood after months of thoughts about death, illness or contagion slowly dripping into the mind? What colour did it transmute into after weeks of exposure to non-stop war imagery? Does our concern come not only from the fact that the conflict is happening in Europe but also from the incessant repetition of the same images, again and again? (cap. Varandas, Quem tem medo das emoções? p.80)

is a researcher in Science and Art at the Faculty of Sciences of the University of Lisbon, integrated in the Centre for Philosophy of Science (CFCUL) where she currently conducts interdisciplinary research projects on the correlation between Theatre and Empathy, Emotion Theory, Ecophilosophy and Ethics.

is a PhD from the NOVA University of Lisbon, being an associate professor in the Department of Communication Sciences, as well as a researcher at the ICNOVA: NOVA Communication Institute. He teaches on topics related to cyberculture and digital media and was the lead researcher of the projects A Ficção e as Raízes da Cibercultura» (2010-2012) and «Redes de Participação Política no Facebook em Portugal» (2018-2022).

is a FCT postdoctoral fellow at CET – Centro de Estudos de Teatro at the University of Lisbon/FLUL. She is a dramaturge and a curator, and the author of O Discurso da Cumplicidade. Dramaturgias Contemporâneas (Colibri 2004) and Ritmos Afectivos nas Artes Performativas (Colibri 2018). Pais also compiled and organized the volume Performance na Esfera Pública (2017, Orfeu Negro) and its English online version, available at www.performativa.pt. Pais has worked as a theatre critic for the newspapers Público (2003) and Expresso (2004). As a dramaturge, she has collaborated on theatre and dance projects in Portugal (João Brites, Tiago Rodrigues, Sara de Castro, Rui Horta and Miguel Pereira) and, as curator, she has conceived and coordinated initiatives on discursive practices, of which she wants to highlight Projecto P! Performance na Esfera Pública (Lisbon, 10 to 14 April 2017).